The night before the weather was calling for 40+ mph. winds and even higher gust's for Saturday but the day dawned partly cloudy, chilly and with very little wind. LOL, well by time it warmed up into the lower 30 F's. temp wise and we were ready to ride after days of snow, cold and gray it got windy!! ;) We headed east on the Rock Island Trail to head to it's end at Powers Blvd. We got to our normal "take a break" point had a power bar then decided to change the route as the winds were getting frisky and we didn't want to be out east if it decided to really kick up. We headed west on the trail over to pick up back streets to take us south on the Shooks Run Trail over to the Pikes Peak Ave. bike lanes heading west to the Cascade St. bike lanes in Down Town Colorado Springs, CO. then headed north back to the apartment as the winds really set in about 2 PM. 15 miles RT. Even with the winds it felt to be back on the bikes! :) A RELIVE video tracing of our ride, enjoy! :)

Posted by B.J. and JoLynn Ondo at 8:51 AM 2 comments:
Email ThisBlogThis!Share to TwitterShare to FacebookShare to Pinterest

After seeing the weather report on Thursday night, stating that Saturday was going to be warmish but very WINDY, we decided to ride on Friday instead! It was cooler than Thursday only 40 F, chilly breeze but very sunny. We took off up the Pikes Peak Greenway to head West on the Sinton Trail over to head south on the Foothills Trail past the entry way to the Garden of the Gods. Took a couple of photos at the crest of the two uphill grades that looks into the valley! 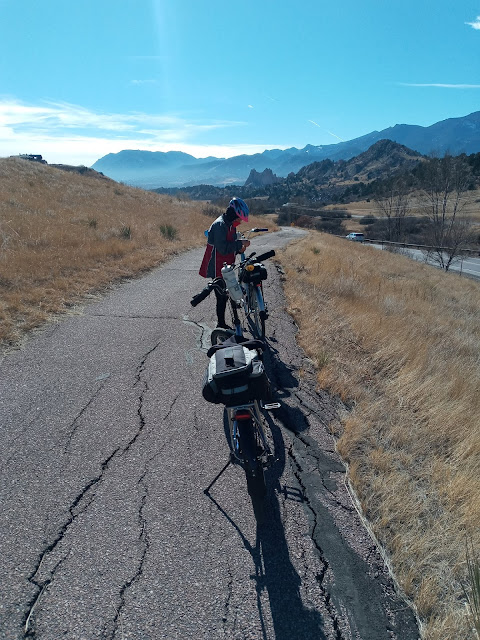 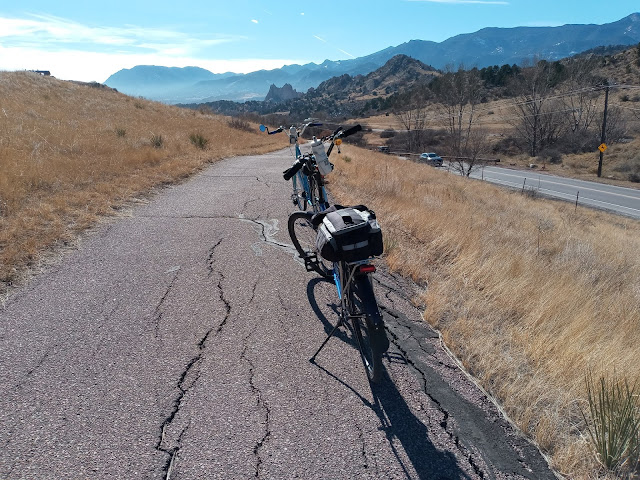 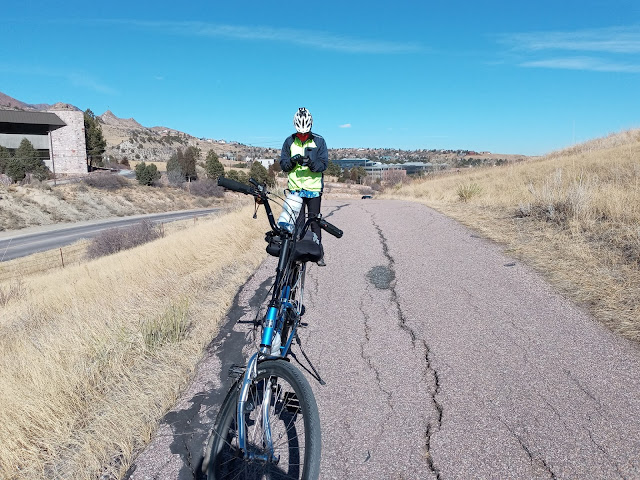 We rode Foothills till it ends at 31st. St. and then proceeded on the Bike Lane over to Pikes Peak Ave. heading west to 36th. and over to Colorado Ave. bike lane to a little Hot Dog stand, got a good dog and sat at the patio area, YUM. Heading East on the Midland Trail up to 7th. St. with a stop at The Colorado Springs Bike Shop to see if Jo's new MTB triple crankset had finally arrived off "back order" (50+ days!!!) and YES, it's here so we made a apt. to have it put on by our favorite bike tech, Rocky, on Sunday! :) Then over to the Palmer Mesa Greenway and finally a short ride on the Pikes Peak Greenway back to our apartment building!!
Posted by B.J. and JoLynn Ondo at 3:07 PM No comments:
Email ThisBlogThis!Share to TwitterShare to FacebookShare to Pinterest

My wife Jo had a doctors appt. early afternoon but the day dawned sunny and suppose to be in the 50 F although a bit windy later on. She told me to go out for a ride so of course that's what I did!

18 miles RT heading up to the Cottonwood Creek Regional Park via the Pikes Peak Greenway and the Cottonwood Creek Trail here in Colorado Springs. It's a slight but constant uphill grade all the way to the park but a real rare occurrence, a light tailwind, YEA!! By the time I got to park to take a break and eat a apple the WIND had gotten a lot stronger but it's almost a total downhill grade heading back towards the PP Greenway!

Lot's of bike out on the trails, that and the dog walkers too! It's great to get in any ride in January!!
Link for a RELIVE ride video: https://video.relive.cc/9170308735_underarmour... 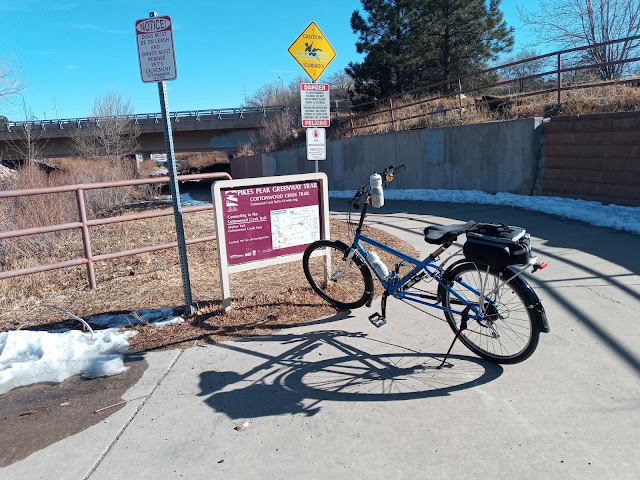 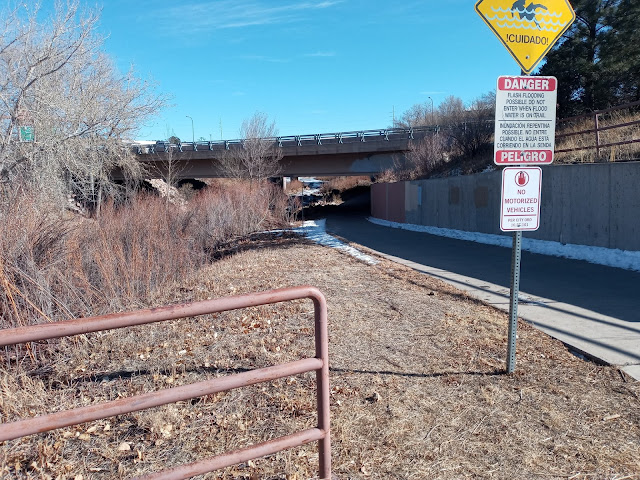 Posted by B.J. and JoLynn Ondo at 3:34 PM No comments:
Email ThisBlogThis!Share to TwitterShare to FacebookShare to Pinterest

January 17, 2021- A Ride up the lower North Cheyenne Canyon Park to have lunch at the Sacred Grounds Cafe, Co. Springs, CO.

We were getting tired of the "same old" loops rides so we headed off towards the North Cheyenne Canyon Park, we weren't going all the way to the Starsmoor Center or up to the top of the Canyon around Helen Hunt Falls as it's usually got ice on the roadway this time of year!!!  We picked up the Shooks Run Trail heading south to Fountain Blvd., then over to head south on the Tejon St. bike lane, which we've found out they've added more bike lane up to the new Traffic Circle (Roundabout for you Euro Types) and then west of the Cheyenne Blvd. bike lane and up into the lower parts of North Cheyenne Canyon.

It was a sunny but CHILLY day, the breeze had a bit of a bite to it, high 30 F's but we really wanted to go for a ride as it's been very gray and cold over the last few days! It's not a long ride but the constant uphill grade starting slowly just past 8th. Street make you work a bit harder so it kept us warm. We stopped and had a fiber One Bar (only 1 gram of sugar) just to keep Jo's levels up and wormed our way up till we got to the cafe. They have JUST changed our Covid-19 Level back to Orange so they had limited to 25% indoor seating but we could have used the couple of tables on the front porch too!

We split a french dip beef sandwich and mixed greens salad with iced tea, YUM. Heading back we were going to head north on the 8th. street bike lane but they've had some water pipe breakage and we were worried about ICE spots so we headed back down the canyon on to Tejon St. bike lane over to pick up the Pikes Peak Greenway heading to America the Beautiful City Park. Took the Walnut St. bike lane over to the Mesa Springs Greenway heading north to the current end of that Greenway, then headed back to the Pikes Peak Greenway north over the Popcycle Bridge and back to the Apt. 17 miles RT and a really enjoyable and slightly different ride a very good day! :)

Posted by B.J. and JoLynn Ondo at 11:28 AM No comments:
Email ThisBlogThis!Share to TwitterShare to FacebookShare to Pinterest

JoLynn and I decided to do a ride on Friday the 8th. as the Weather Guessers said we had a COLD front sailing in on Friday night and it would snow all day Saturday. It was at least sunny but the "breeze" was chilly!! Started out in the mid 30 F's with the temp suppose to hit 40 F by afternoon. We headed for the Templeton Gap Trail as it's been a while since we've done it. It's got a couple of very steep grades and I really like my newly added Truvativ FireX GPX Triple Crankset 22/32/44. I was able to get up the steepest incline only using the 3rd. rear cog and the 22 tooth chain wheel so I still have two steps lower gear I could have used, YEA!!

Headed up the trail to Union Blvd. which has a Sound Wall with a sidewalk along it we use to get over to a back street to pick up the Old Templeton Gap Road bike lane. Stopped at Nancy Lewis Park for a break, then headed towards down town Co. Springs on the bike lane till it ended. JoLynn wanted to stop and buy a Mega Millions and Powerball ticket, stopped at a 7-11, then headed over to Weber St. and found out they had installed a bike lane!! We took it to Pikes Peak Ave. bike lane thru down town itself over to the Colorado Ave. bike lane to pick up a side street in front of the US Olympic/Paralympic Museum over to the path into America the Beautiful Park, headed north on the short path past the over pass towards another bike lane over to the Palmer Mesa Greenway path over to the Pikes Peak Greenway then back to the apartment. 13 miles RT, yes the chill was in the air but the sunshine stayed till we got back in and the bikes tucked away!! 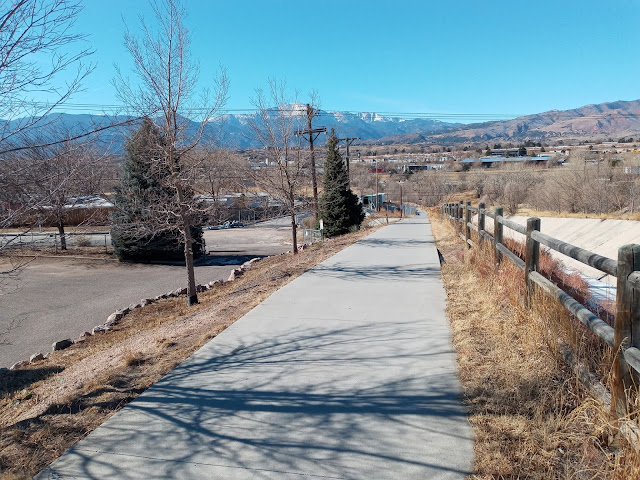 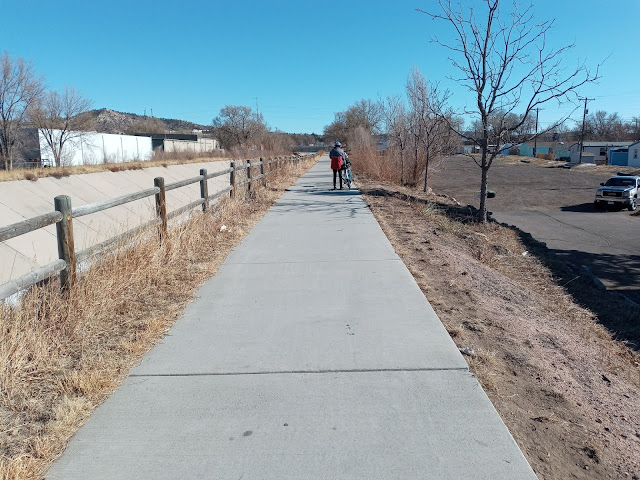 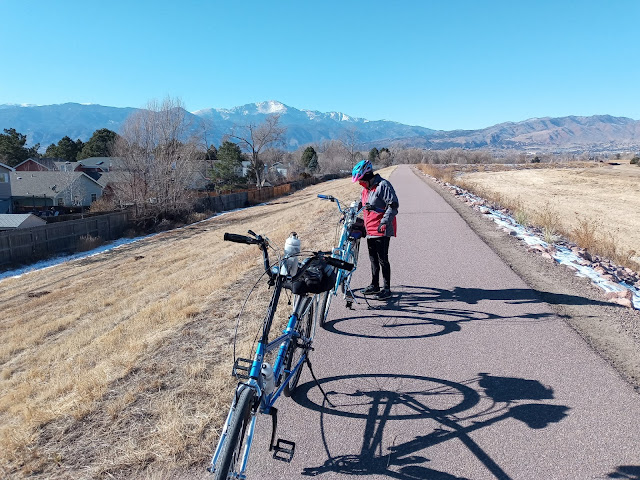 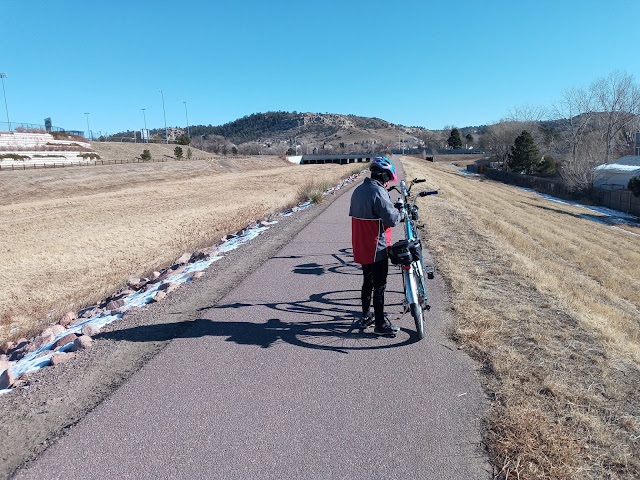 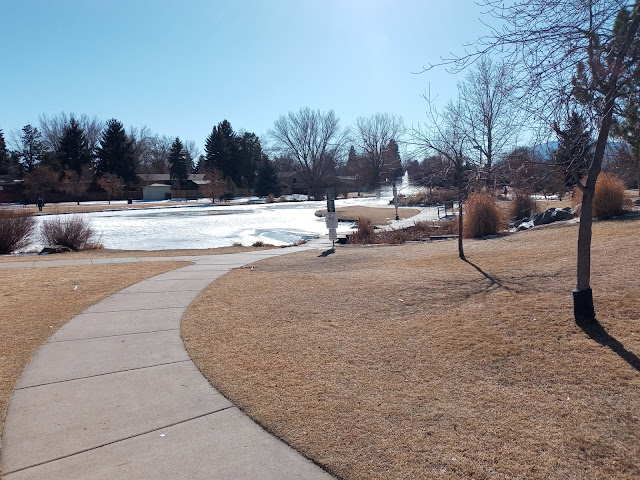 Posted by B.J. and JoLynn Ondo at 1:01 PM No comments:
Email ThisBlogThis!Share to TwitterShare to FacebookShare to Pinterest

January 7, 2021-A ride up to Angletech to have service done to my RANS Fusion


It was a chilly and cloudy day but I was having MTB triple crankset installed on my RANS Fusion cf bicycle up at Angletech our Recumbent/RANS dealer here in Co. Springs, CO. The normal way is to take the Pikes Peak Greenway over to the Sinton Trail, then bike lanes to the shop. They have closed off the trail (due to some kind of damage) and made a "detour" but it was ICY and Slick and on a upslope!! There was just enough semi-dry space to keep the bike off the ice but even with MTB style shoes I was slipping all the way up! LOL, at 65 I don't need the extra work!!

Using the back street detour I got over to the Centennial Blvd. Bike Lane and over to the shop. 32 F, Cloudy and breezy but only a 7 mile RT, LOL, it was even more fun waking the bike down the detour slope!

Posted by B.J. and JoLynn Ondo at 3:02 PM No comments:
Email ThisBlogThis!Share to TwitterShare to FacebookShare to Pinterest

January 4, 2021-First ride of the the year, was just an errand run but it felt good!

Finally, it's been COLD and snowy here in So. CO. for over a week, yes Jo and I are weather wimp's!! If it's not at least 40 F and SUNNY we use the "in-home cycle trainer" as we don't like the COLD and it's just not FUN to have to dress like the "Michelin Man" just to get in a ride! We got the snow to quit for a couple of days but the temps barely warm enough to melt the ICE on the roads. As of the 4th. it was clearing (except for several ice patches in different places on our entire route) and the sun was out with a high temp of 45 F or better so we got in a short errand run for our 1st. ride in 2021! 10 miles RT using bike lanes, back streets and urban trails. We walked the bikes over the icy patches, at 65 years old a FALL is not a good thing!! We did find a empty picnic table at the southern end of the Shooks Run Trail and ate our brown bag lunch. We thought about riding further but after battling the icy patches I think Jo was a bit worn out so we headed back to the apt. and tucked the bikes in for the night. Here's a short vid of the ride:

Today is suppose to be WINDY and bit lower temps so we will "ride inside" and hope it doesn't SNOW on Weds. so we can try for a ride on Thursday as the up coming weekend looks like CRUD, more cold, maybe snow flurries and more WIND, bummer! :( Here's to 2021 may it be a banner year for all our riding! :)
Posted by B.J. and JoLynn Ondo at 7:54 AM No comments:
Email ThisBlogThis!Share to TwitterShare to FacebookShare to Pinterest
Newer Posts Older Posts Home
Subscribe to: Posts (Atom)