Major upgrade to the tandem trike!

Sunday Sept. 22nd. 2019. Although we really like the way the NuVinci N330 CVT Internal Gear Hub on the rear end works, it's pretty limited "gearing wise" especially for "HILLS"! We'd hoped to be able to afford adding a E-assist motor system but a set up heavy duty enough for our tandem trike is $2800.00 or more!!! :O We decided to try changing it to a "Rear derailleur/Cassette set up", the cassette is a 10 speed with 11x42 tooth cogs! Yes, it was worth the $750 price tag (parts and labor) as it is now easier to make the tandem climb hills and uphill grades, YEA!!!

LOL, NO it won't make us a bit faster on the flats so we still won't be able to do any "Group Rides", unless the fellow riders don't mind us taking up the rear of the pack and coming in at our own pace!! Still we are both 64 years old with some medical problems so ANYTHING that makes it physically easier for us to climb hills is a real blessing!! Our new drive train is: (front) Efneo 3 speed, Internal Gear drive unit, equal to a "triple chain wheel set" of 28/40/52 with the 11x42 rear cassette. We took it for a test run on some of the more HILLY parts of three of our local urban trails, "Sinton, Foothills and Mesa" Trails here in Colorado Springs, CO. It was a lot easier to get up the grades than before so we are quite happy!! The first photo is on the Foothills Trail, just outside of the Garden of the Gods, the second photo is at the Mesa Rd. Overlook just off the Mesa Trail! :) 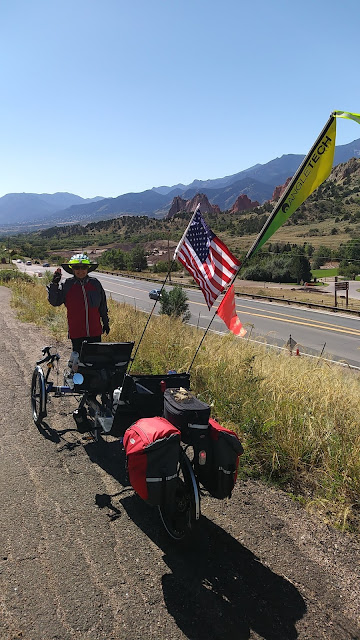 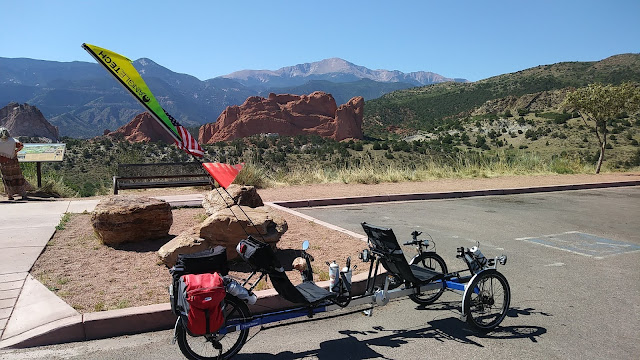 Posted by B.J. and JoLynn Ondo at 12:52 PM No comments:
Email ThisBlogThis!Share to TwitterShare to FacebookShare to Pinterest

A tough ride with a new friend

Weds. Sept. 11, 2019. I am the "administrator" for a Facebook group called the, Front Range Trike & Bike Network. Our newest member, John K. just got a new ICE trike and is trying to get in his first miles on the trike and not having transportation I put the Bike E into the old Ford Ranger and headed up north of Colorado Springs (Brairgate Area), to ride with him on some local area urban trails. Well his area has a lot of heavy uphill angle climbs on the trails and it was really tough for him as he has a type of MS and is a large man. We took our time but he had to stop a lot and rest and I had to PUSH him up to the top of the last very hard climb to get him back to his place!! LOL, we finally made it back, we were riding on trails I'd never been on, (Brairgate and Woodman Trails). On that last uphill grade I'm not sure I could have actually rode the Bike E all the way, I might have had to "walk" to the summit myself!! I'm glad I was there, don't know if he could have made it back by himself. Well for the next ride we do I'm going to pick him and his trike up and we will find some of the more "mellow" urban trails here in the Springs! ;)
Relive Map of the ride


Posted by B.J. and JoLynn Ondo at 10:03 AM No comments:
Email ThisBlogThis!Share to TwitterShare to FacebookShare to Pinterest

Riders on the Storm

Sunday Sept. 8th. 2019, We stayed closer to home here in Security, CO. as the weather forecast called for possible "Heavy Thunder Showers with HAIL"! We rode south to Fountain, CO. stopped at John Metcalf Park for a snack and a break, then rode several back roads thru the Little Ranches area and back to Fountain via Jimmy Creek Camp Road. Stopped in Fountain and had a good pizza and salad then headed out to do some "errands" on the way back to the storage shed. Got back before the dark clouds started coming over Pikes Peak. 24 miles RT. Sunny, 80's slight breeze a very good morning to RIDE!  Relive Video Map: Relive Video Map Link

Posted by B.J. and JoLynn Ondo at 3:38 PM No comments:
Email ThisBlogThis!Share to TwitterShare to FacebookShare to Pinterest

Sadly our 17 year old PU truck isn't really "Interstate Worthy", we wanted to go and ride on the Reservoir/River trail in Pueblo State Park but instead loaded up the truck and went and rode the "Midland Trail" from America The Beautiful Park, down town Co. Springs towards Manitou Springs. This is one of the more "shaded" urban trails here and since it was a 90F+ degree day, with almost no breeze and SUNNY, it was welcomed! We headed out of the park heading west, the trail follows Hwy. 24 to the Westside of Colorado Springs (Old Colorado City), then goes to a certain point in Manitou Springs, where it ends and you have to use "back streets" to get into Manitou. We enjoyed the ride and we seemed "stronger" than the last time we rode this trail so maybe after 600 miles we are finally getting our "Recumbent Legs" working better! ;) After a break we got brave and headed south on Manitou Ave. (very busy with tourist traffic in summer months!!) to a pizza parlor for a excellent 10in. Hawaiian Pizza and Salad!! After filling up, we picked up the trail (in Manitou it's called the "Creekside Trail) back to AtheBP and then home. 14 miles RT, HOT!! It was still a very enjoyable RIDE!
Relive Route Map
Our You Tube Channel Video:
Posted by B.J. and JoLynn Ondo at 12:46 PM No comments:
Email ThisBlogThis!Share to TwitterShare to FacebookShare to Pinterest
Newer Posts Older Posts Home
Subscribe to: Posts (Atom)