Sunday December 22, 2019, the weekend before we didn't get to ride due to SNOW and COLD and the temps stayed cold after that 6+inch snowfall till late Thursday but with a decent temps and sun shine on Friday and Saturday, there had been a good melt here in Security so we HOPED the trails in Colorado Springs would be in decent shape. We decided to ride the Rock Island Trail as it had been a while since we rode there. We loaded up the truck with the trikes and parked at Bott Park, unloaded, then rode over to the Shooks Run Trail for about a mile to the "junction with the alley way that starts the Rock Island Trail heading north. Well the alley way was covered in 2-3 in. deep snow, it's great to have "3" wheels on the snowy, icy surface, with a bit of slip-sliding here and there we got to the actual trail and found it was in better shape with just snow/ice here and there. It had been plowed at least some so we headed to the end point of the trail at Powers Blvd. 10 miles away. It was a nice day, 60F with only high thin clouds and just a little breeze we just plodded along and enjoyed being able to RIDE!

We stopped at one point and had a protein bar then continued north, we were worried that the underpass tunnel at Circle Drive might have deep snow or water but it had been mostly plowed so we didn't have to slow down and take the Ped crossing light! JoLynn got to try her new gearing set up, from the stock 30/40/52 triple chain wheel set to a MTB 22/32/42 set and from 170mm crank arms down to 155mm crank arms which works out GREAT for her as she only has a 26 in. inseam and it was a lot easier for her to SPIN instead of semi-MASH the pedals!! :) We shared the trail with walkers, runners, riders and HORSES too so there were a lot of smiles and wishes of "Merry Christmas"! :) We went to the end of the "concrete" and decided NOT to take the last 1/4 of gravel and SNOW/ICE to the end point. Turned around and stopped at a "bench" to eat our "brown bag" lunch. Got back on the trikes and headed south back to the park, loaded up the truck and headed out to do some food shopping before taking the trikes back to the storage unit and tucking them away till next time!  13 miles, would have loved to do more miles but the sun was heading down fast this time of year!! :) 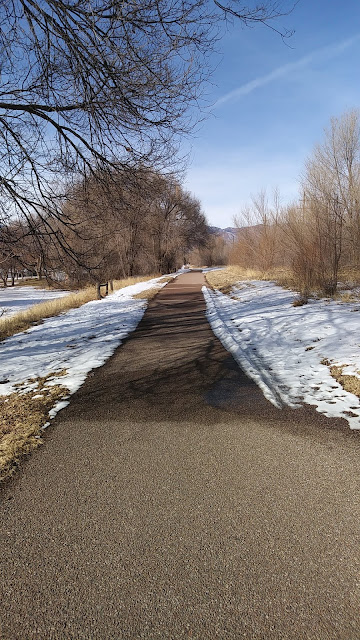 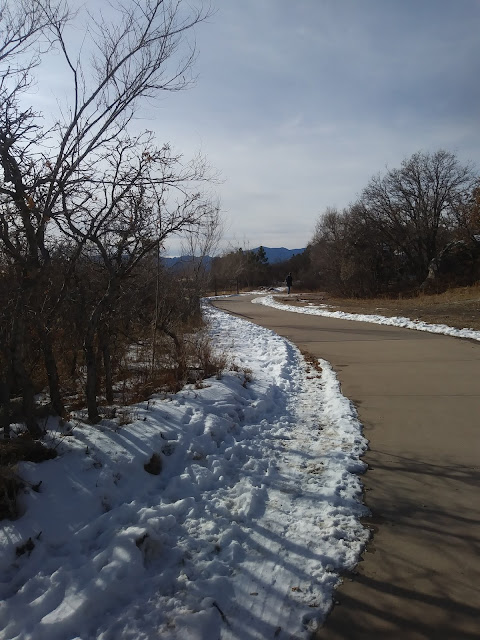 Posted by B.J. and JoLynn Ondo at 8:05 AM No comments:
Email ThisBlogThis!Share to TwitterShare to FacebookShare to Pinterest

Still waiting for the "improvements" on the Midland Trail

Saturday December 7th. we packed the trikes in the truck and headed over to the Fontero St. Trail Head for the Pikes Peak Greenway Trail. When we got there there wasn't any place to park as they decided to stage the Santa Claus 5K Run and 15K Bike Ride there instead of the normal start usually at America The Beautiful Park down town. So we continued to see if we could find a spot at Monument Valley Park and with luck we did! :) We wanted to try the Midland Trail again and see if they'd finally finished the new bike/hike underpass under Manitou Ave. and the Bike Plaza but alas it's still not accessible as of yet, RATS! They did have one HUGE improvement up and running, there is now a stop light at the intersection of Ridge Rd. and Colorado Ave. Yes, now it's easy to get across and use the new Bike Lane over to Columbia St. to go the back way into Manitou Springs, passing the Buffalo Lodge Bicycle Resort, so much easier!!

We headed over to the Swimming Pool Park in Manitou using the back road till we could get to the Skateboard Park and rejoin the trail (ie: in Manitou it's called the Creekside Trail) it was a cloudy day but warmish on the way to the Park where we stopped for a Brown Bag Lunch. Took the same way back although we did divert to the Colorado Springs Bike Shop on Colorado Ave. and 7th. St. to check for a new tail light for JoLynn's trike as it's getting fussy in it's old age, LOL! ;) Back to Monument Valley Park, loaded up the trikes and headed to Natural Groceries for some supplies, then back to the Storage Unit to tuck the trikes in. 13 miles RT and it was sunny with a slight breeze on the way back to the park. :) 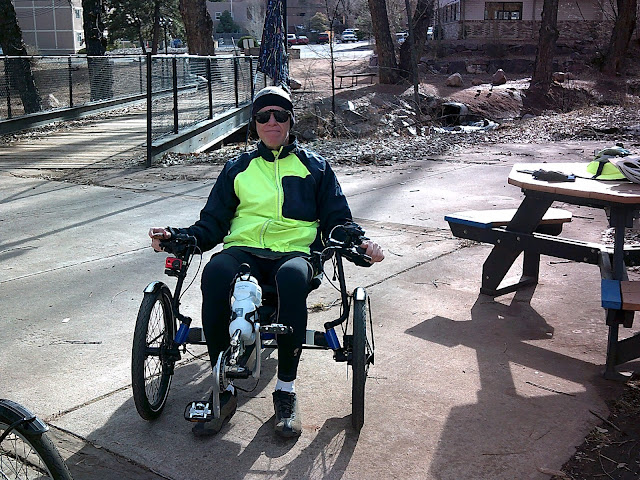 Posted by B.J. and JoLynn Ondo at 10:21 AM No comments:
Email ThisBlogThis!Share to TwitterShare to FacebookShare to Pinterest

After a couple of rides, we found out the "bike and trike combo" wasn't working well! The bike is lighter than the trike and I'm a "stronger, faster rider" than JoLynn. Either I was "running over her" or she was lagging behind as we rode together. The solution was to put ME back on a TRIKE, which we did as of November 30th.

The Terra Trike Rover Trike is about 10 lbs. heavier than the Trident Stow Away 1 that JoLynn rides so that actually helped by slowing me down a bit to push the extra weight. The other major help was that now I can ride at HER PACE without worrying about "the bicycle" falling over at really slow uphill speeds!!!! It's surprising how much "energy" is used just trying to "keep your balance" on a recumbent bicycle when your having to go SLOW on uphill grades!! Infact this works so well we are at least for the near future going to not add a E-assist system to JoLynn's trike, we just won't be able to ride in any group rides or IF we are leading a group ride, I will put JoLynn in the lead and let her set the pace, I'll take up the end otherwise known as the "SWEEP" rider!

The group will just have to go "our speed" or they can just head out and meet us at stopping points along the ride! :) As we are both 60+ there will come a day we we HAVE to have E-assist added but hopefully the EXPENSIVE PRICES for those systems will come down and be much more affordable by the time we really NEED it just to be able to RIDE! It was a sunny day but the breeze was VERY CHILLY so our ride was a short 13 mile RT ride down to the pond at the Fountain Regional Park in Fountain, CO. We took a couple of photos by the pond and had a little picnic brown bag lunch on a table in the sunshine! Then we headed back to the storage unit and tucked the "trikes" away. I've already SOLD my Bike E to a rider in AZ. so we've got a bit more room in the storage unit. I'm really jazzed to be back on a TRIKE, the recumbent bicycle was FUN but the trike is so much easier to handle and that makes the ride more enjoyable! :) 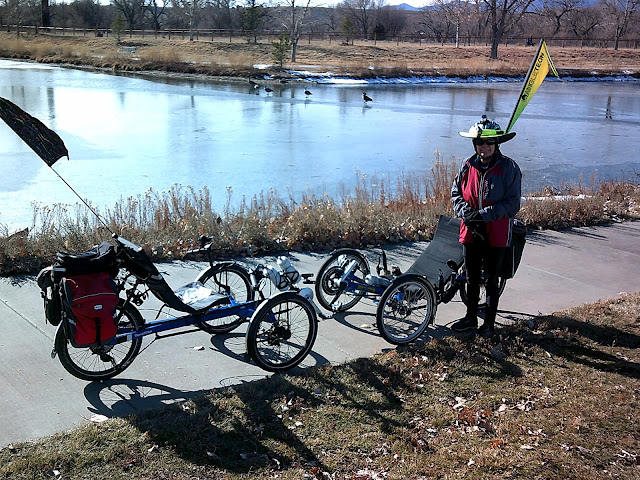 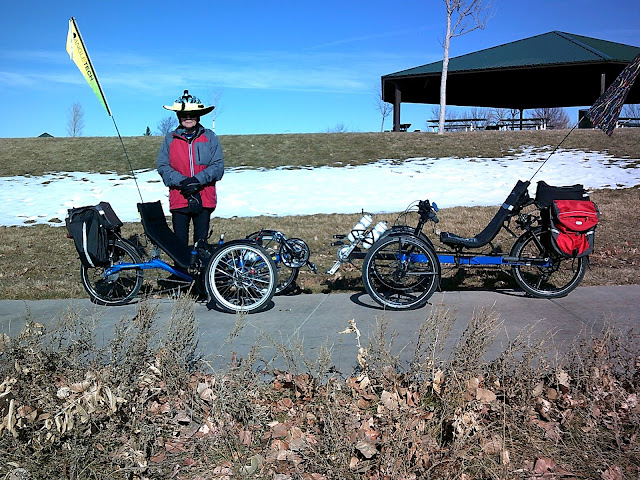 Posted by B.J. and JoLynn Ondo at 8:05 AM No comments:
Email ThisBlogThis!Share to TwitterShare to FacebookShare to Pinterest
Newer Posts Older Posts Home
Subscribe to: Posts (Atom)