November 26-28, 2022-Ride to Manitou and Cottonwood Creek Trail ride before the SNOW in our area by Tuesday early morning!

Sunday was cold, grey and windy but Monday said it was to be sunny and a high of almost 60 F so we headed out for a ride. LOL, the weather guessers were wrong! It was cloudy and a bit nippy but with snow coming in for Tuesday early morning, we headed out to ride a portion of the Cottonwood Creek Trail. We started on the Pikes Peak Greenway, heading north. Then turned northeast on the CCT. Rode up to the Academy Blvd. North off trail ramp and then turned around and headed to a close Panera Bread for a HOT tea to go with our brown bag lunch! The wind was gaining speed, so we ate "inside" and not on the patio like we normally do. The sun did finally come out, so we rode south over to the Fontanero St. Trailhead, then via back streets to the Safeway Food Store for a few items to get us past the cold spell! Here's a "Video Short" of part of the CCT:

Well, it's Tuesday Morning and there's 2 inches of fresh snow outside our windows so no riding today, RATS. Oh well, we did enjoy yesterday's ride and it should not take too long to melt off the snow so we can RIDE! :) 20 miles RT, 35-55 F temps, mostly cloudy till later in the day, the CCT is a "urban trail" right at 10 miles long. All uphill grade heading north but not bad overall. BJ
Posted by B.J. and JoLynn Ondo at 8:13 AM No comments:
Email ThisBlogThis!Share to TwitterShare to FacebookShare to Pinterest

It's that time of the year, having to use the recumbent style exercise bike and watch YouTube trike and bike videos, while waiting for those days of dry trails/roads and warmer temperatures!  We did get out on Monday the 21st., (we are poor but retired!!), it was sunny and almost 50 F. We wanted to see how the "bike lane", on the new Centennial Blvd. South Extension came out after months of construction to make the road go from Chestnut Street up to Fillmore Street. Wow, it's good but it's all "uphill" so we got a great workout, LOL! We found out they continued to bike lane all the way down to the Garden of the Gods Road so now we have two ways to get to our local recumbent dealer, Angletech, [www.cycledifferent.com]. The bad thing is the traffic from Fillmore to GoG Road is intense but it's good to have a easier way up to the shop if for some reason the Sinton Trail is closed!

We rode to pick up the Sinton Trail, heading south to the Pikes Peak Greenway, turned north to head over to the University Village Colorado Center, headed to Panera Bread for our brown bag lunch and unsweetened HOT tea as the temps drop much faster in these winter afternoons! With the wind getting a bit stronger and the waning sunlight we decided to just head back to the apartment and call it a day! Felt SO GOOD to ride after a few days being stuck inside using the recumbent style exercise bike!! 21 miles RT.

Posted by B.J. and JoLynn Ondo at 6:31 AM No comments:
Email ThisBlogThis!Share to TwitterShare to FacebookShare to Pinterest 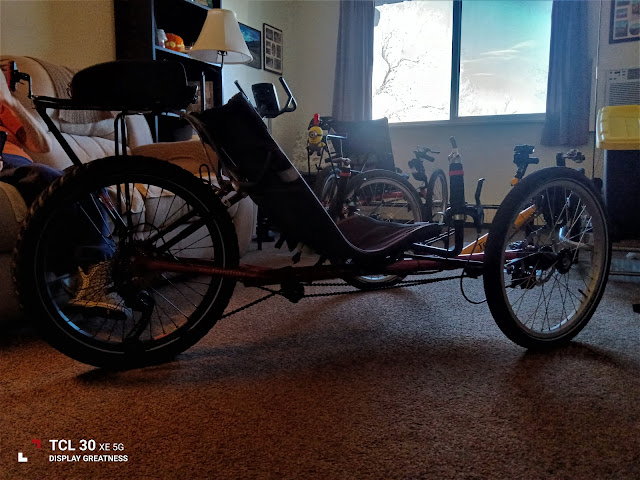 I had a major service appointment at Angletech for my TT Tour 1 Trike on Nov. 15th. and of course, we got a major COLD front! :( I had to "layer up" as the high was only in the 20 F range and that would be at 3 pm, my appt. was at 1030 am. The way to Angletech is all uphill grade so the workout kept me fairly warm. My trike, "Abbey-Normal", came with a set of adapters so you could use a 26 in. rear wheel. I rode several hundred miles with the 26 in. rear wheel but didn't like the set up much, so I had them switch it back to a stock 20 in. rear wheel and replace the rear derailleur cable.

Kirk, the head tech and I were discussing how "vague feeling" the Avid BB5 disk brakes that came on this trike felt, he suggested we upgrade to Avid BB7 disk brakes. The BB7's are MUCH better in "feel" and stopping power!! The 20 in. rear wheel switch has given me MORE "low end", i.e.: hill climbing is easier! I did lose some "top end", i.e.: overall speed on flat land, but that's fine with me as Jo and I NEED the climbing gears much more than flat land speed!! We are 67 years old, and I have to use a "cargo trailer" to get food and supplies or larger objects.

The ride back to home, seemed colder as it's mostly downhill grade so the speed was up and so was the "wind chill". Happy to get back to the apartment and some sugar free hot coco! Short ride at about 8 miles total but in the COLD, that just fine with me! :)

Nov. 16, It's Wednesday so it's time for the weekly FOOD RUN, at least it was a bit warmer temperature wise, and the sun was out!! Hooked up the cargo trailer, LOL, the new 20 in. rear wheel does make the "trailer hitch receiver" even lower to the ground but still works well.

We had to leave later than we usually did as it takes a while to "Warm Up" now that's it's winter!! Headed off to the Walmart Neighborhood Market Place on Union and Rock Island Trail. With the late start, the time spend shopping, etc. it was quite a bit later than we have been leaving the store, so we decided to just head home instead of riding up to the University Center Colorado to Panera Bread to get iced tea and have our normal brown bag lunch ride.

Infact, we ate lunch before we left to go to the store due to the chilly day! Back home, dragged up the cargo trailer and both trikes to our 2nd. floor apt., put away the food and supplies and we made some HOT tea to go with our afternoon snack. It's gotten ever COLDER since so we haven't been able to ride. Spending the next few days on the "exercise bike" at home, maybe we will be able to ride again by Tuesday, the 22nd. looks like a warm front might finally return! :) BJ Sorry to COLD to take photos or videos!! 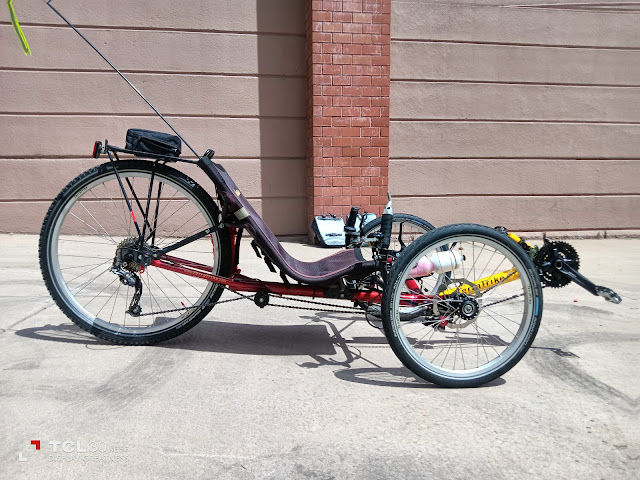 Posted by B.J. and JoLynn Ondo at 7:46 AM No comments:
Email ThisBlogThis!Share to TwitterShare to FacebookShare to Pinterest

We got a invite to ride with the "Veteran Powered Vehicle Group" at the Annual, Co. Springs, CO. Veteran's Day Parade on November 5th. As I am a veteran of both the USAF and the USN, I said yes, and asked if Jo could ride with us for her Dad, Retired US Army, SFC James E. Perse, who served "3 Tours in the Vietnam War in his career!! We got to our group stagging site a bit early and awaited for other riders to arrive. We ended up with 8 riders on a lot of different and even, custom made bikes! 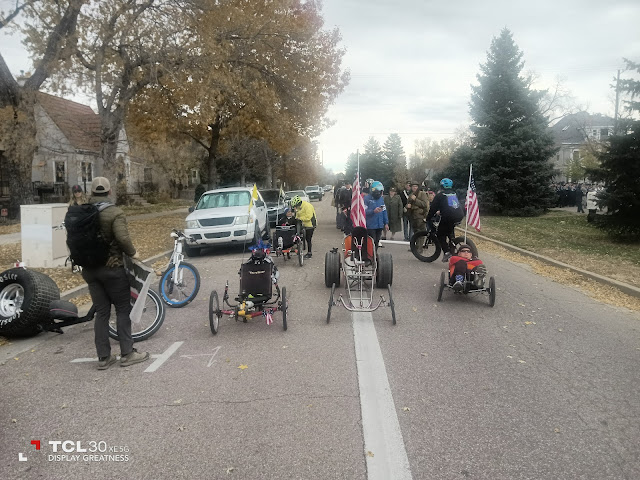 We were in stagging spot #61 so it was going to be awhile before we got to join up to the parade which closed 7 city blocks along Tejon St. Floats, Groups, Bands, Many JRROTC units from the high schools, the Honor Bell and Solders from Ft. Carson were there. We had a excellent reenactment group who had "period" costumes from every era behind us! We finally got started and Rodger and I held up a "banner" while riding, it was a bit tricky but recumbent trikes made it work! We got to the end, took a group photo. It started out quite gray and chilly, but it got partly sunny and a bit warmer toward the end of the parade. Most of the group headed to go eat but we had a important errand to run, so we said our goodbyes and headed off. After our errand was done, we ate our brown bag lunch at Prospect Lake, then decided to head up to Panera Bread in the University Village Colorado Center for either hot or cold tea according to what we wanted by the time we got there. It was VERY windy for a while but it slightly mellowed on the way back home. 26 miles total, a chilly but fun day ride to support Veteran's! Here are some of the bikes: 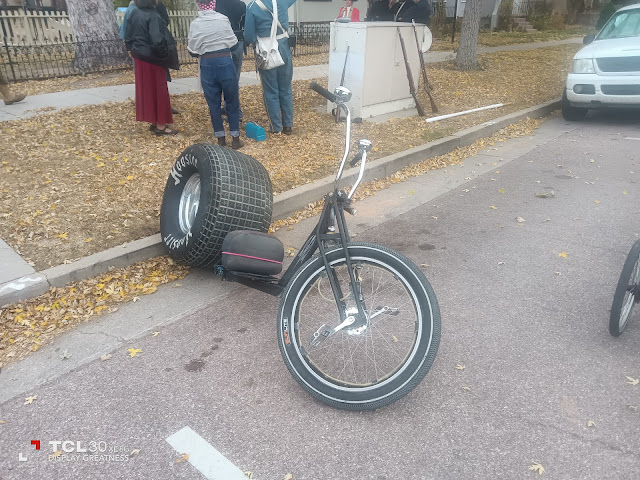 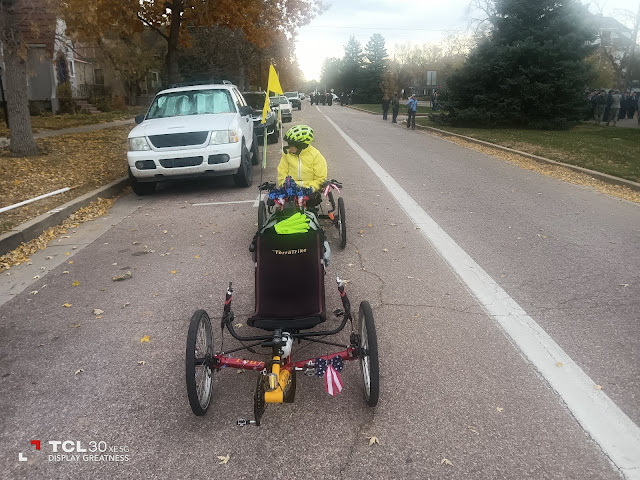 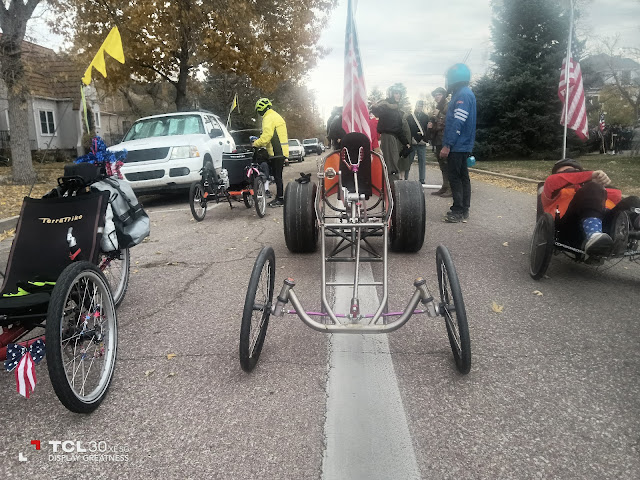 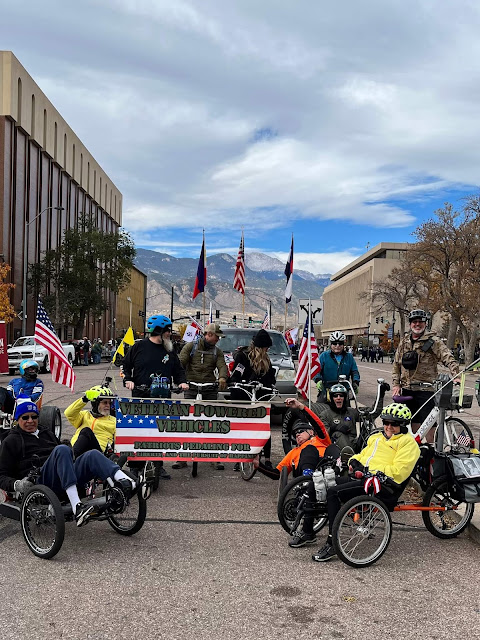 I will add a video, when it's produced, very soon, thanks! :)
Posted by B.J. and JoLynn Ondo at 6:20 PM No comments:
Email ThisBlogThis!Share to TwitterShare to FacebookShare to Pinterest
Newer Posts Older Posts Home
Subscribe to: Posts (Atom)