I had started on a "tricycle" at 4 years old, then when my Dad was stationed in Germany, (US Army), I got a used Huffy coaster brake bicycle, along with my two sisters we rode all over the post's roads and trails.
When we got shipped to Ft. Carson in Colorado Springs, CO. our bikes had been dropped by the overseas shipper/ (or Dad sold them due to weight limits of household goods they could ship, I still don't really know for sure!!) So, I didn't have a bike till my Sister Sue won a used Huffy coaster brake bike in a raffle and "shared" it with me.
When my dad went to Viet-Nam, he told us kids that if any of us had a "perfect attendance" at school while he was gone, he would buy that child and new 10 speed bike. Well, I had the perfect attendance, but Dad gave the 10 speed to my younger brother (I was in 9th. grade) for some reason, I didn't speak to him for 4 months!
So thru out High School (till I got my drivers lic.), I would borrow my brothers 10 speed which was way too tall for me and I quit riding after a semi-serious crash! BJ and I hooked up again in 1979 after we'd both been through divorces to be just friends and ended up getting married in 1980.
In 1984 I wanted to have a multi-speed bicycle so we bought me a Centenarian Sport Mixte (ladies framed) 12 speed bicycle and I had a "triple crank set" added so it was up to a 18 speed and set it up for touring. 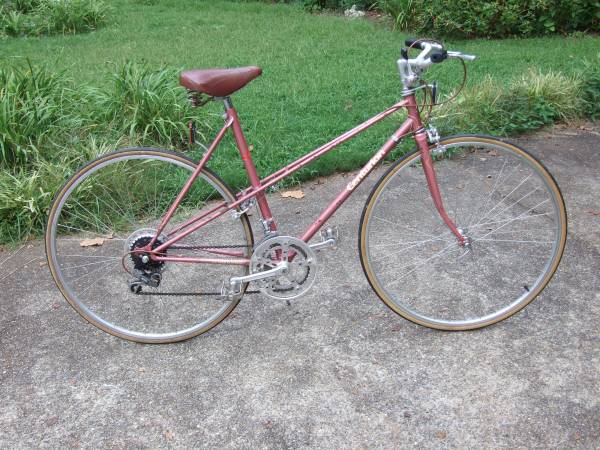 Fate was not kind to me; at work I had a box of encyclopedias fall off a overhead shelf and it landed on my knee! It broke the kneecap and it never quite healed right! I tried to use bike riding as recovery therapy, but the knee would not let me go very far. I sold the bike and gave up riding! :(
In 1995 I wanted to try again so I bought myself a Fuji Monterey 1.0 Step-Thru comfort bike. 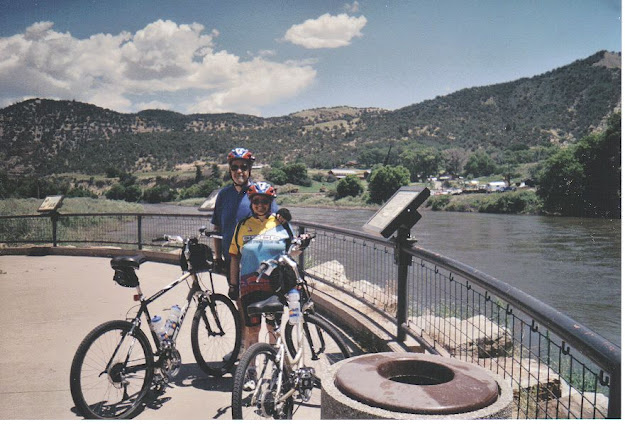 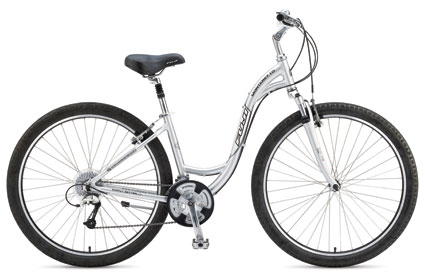 Alas we ran into financial problems, and we had to sell off the comfort bikes in 2006. :(
In 2009 I took our income tax refund and bought myself a Jamis Trail X 3.0 Mountain Bicycle. 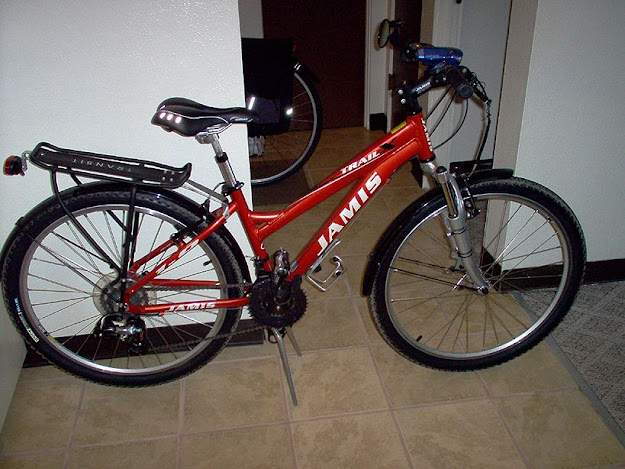 In January 2011, we traded in the MTBs for Sun EZ-1 SX recumbent bicycles. 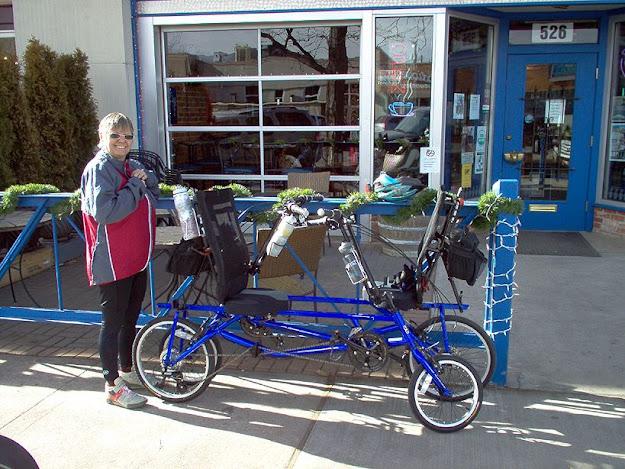 I have a very short inseam, (26 inches) and with that a short X-seam measurement (the leg measurement on a recumbent) and the EZ-1 SX, was always a bit to stretched out for me to ride with real comfort so I sold my EZ-1 SX.
So I wouldn't be without a bike, BJ me bought a used Mongoose Breakaway 450 Ladies Frame Road bike. 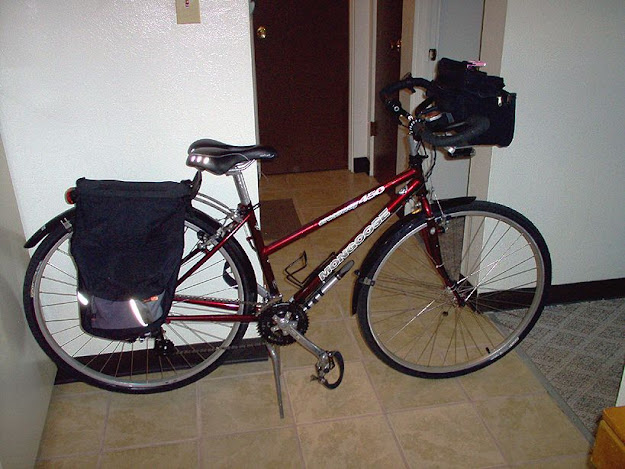 We decided we'd like to try a TANDEM bicycle! ;) We sold the recumbent bikes and bought a New Trek 900 Recreational Tandem (September 2011).
I kept my Mongoose Road bike and BJ bought a used Fuji Monterey 3.0 and converted it from a comfort bike to a road bike to have separate bikes to ride when we weren't double up on the tandem! 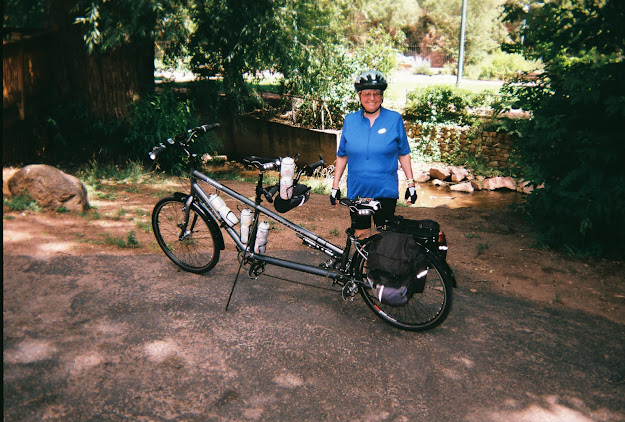 I loved being the "stroker" (back seat) but alas BJ with his Reiter's Syndrome (arthritis in all major joints), couldn't support the weight of both of us and the heavier tandem at stops so sadly we had to sell the tandem. :(
Since we didn't own a car, we decided we needed both a "primary and a backup" bike. In February 2012 we bought "flat bar road bikes", called Fitness Bikes, my 1st. one was a KHS Vitamin B lady's frame. 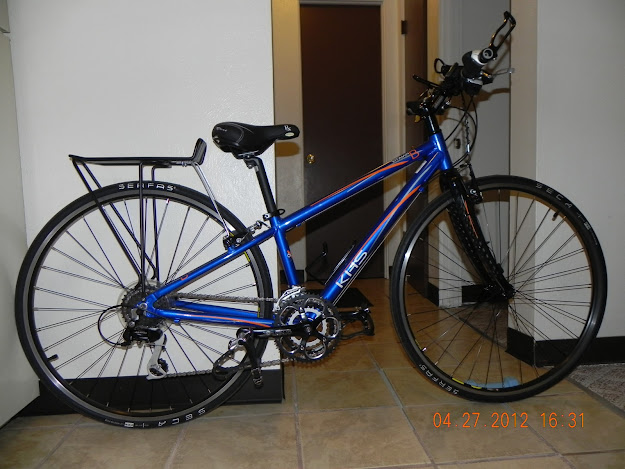 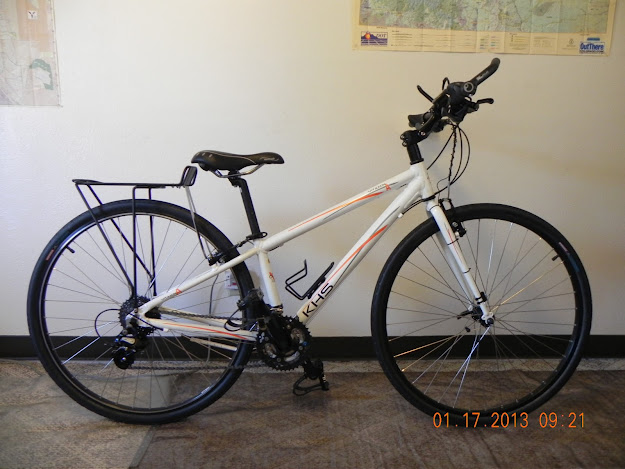 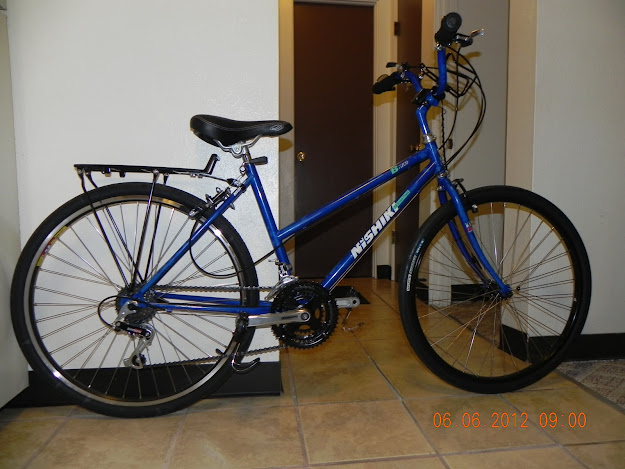 My daughter decided that bicycling was not her cup of tea so she gave me the White KHS back. We ended up selling all 4-fitness bicycles to get CASH for a down payment on a Harley-Davidson Motorcycle.
We were not going to ride bicycles anymore but since I still had the used Nishiki MTB, BJ bought a used Mongoose Switchback MTB so we could ride together and not have to give up riding bicycles. :)
In early 2017 we wanted to upgrade our bicycles so we bought Del Sol Lxi 6.1 Comfort Bikes and I got a Step-Thru model in screaming zonker yellow! :) 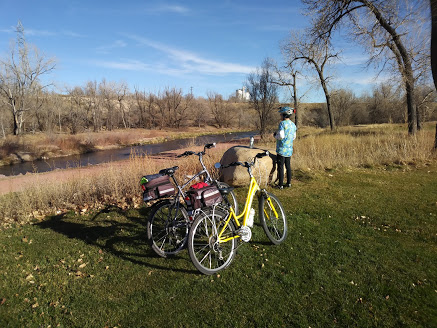 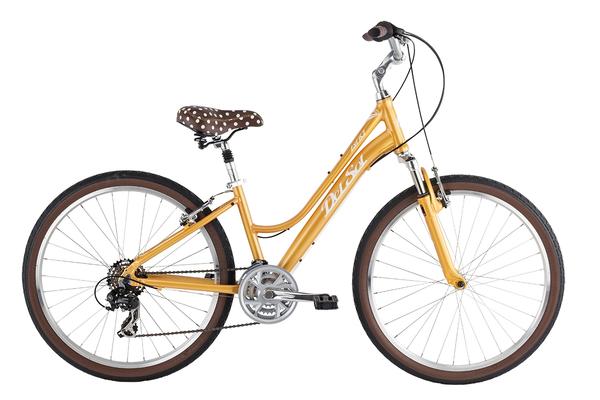 In March 2018 I sold my Del Sol Lxi 6.1 step-thru bike so I could buy a used, Terra Trike Cruiser "Recumbent Trike". This is my Trike History:
March 2018: My first trike was a used 2006 Terra Trike Cruiser, 24 speed, we had to find a EXTRA SMALL boom so it was "yellow" instead of blue due to my very short X-seam measurement! We also changed to a 22/32/42 155mm crank arms chain ring set up so I wouldn't hit my heels on the crossbar. 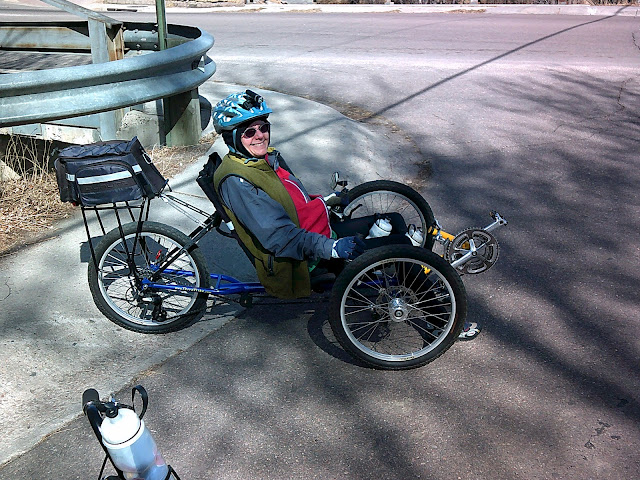 In Jan. 2019 I had a heart attack and to help with my recovery, we traded in our single recumbent trikes for a Terra Trike Rover Recumbent Tandem! I could work up slowly and heal and work my way back to a recumbent trike of my own again or at least I could stay active on the tandem. 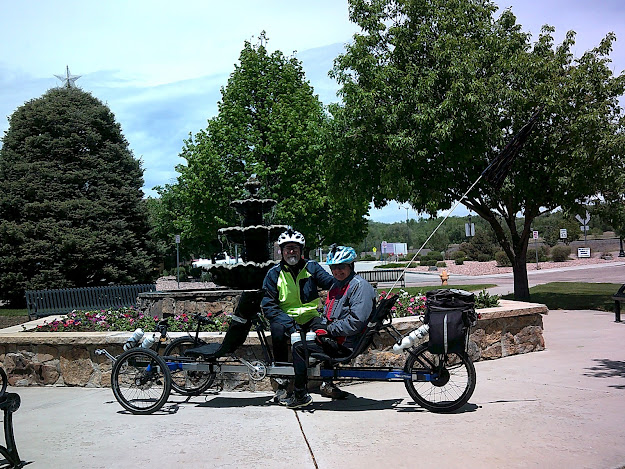 After I got healthy, we sold the tandem trike, and I got another single recumbent trike. A Trident Stow Away II with a E-Assist motor set up. 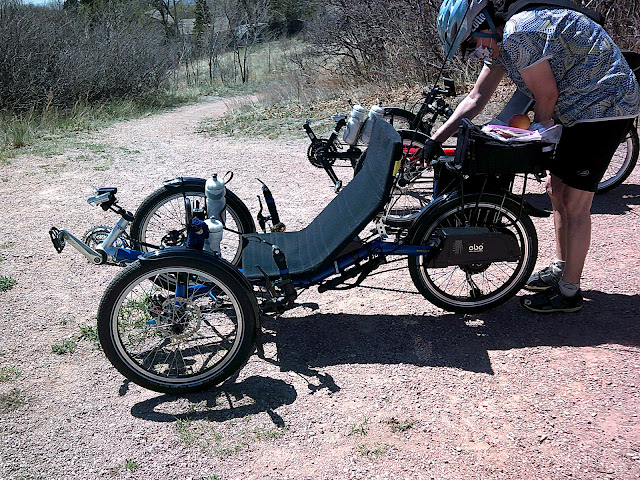 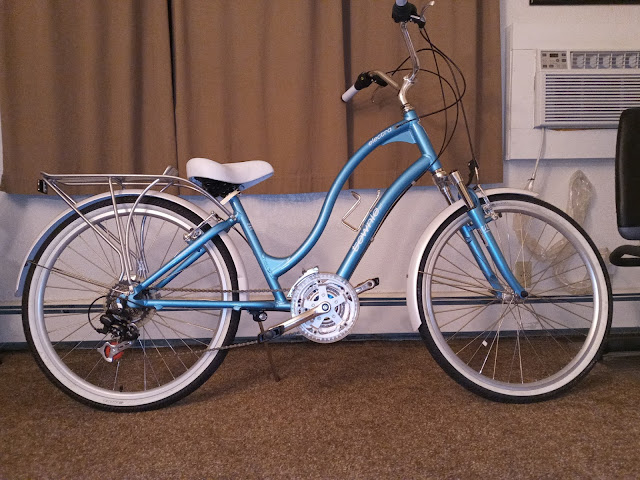 The Electra Townie didn't really fit me well so sold it and bought me a 2021 Liv Alight 3 Hybrid bike in March 2021: 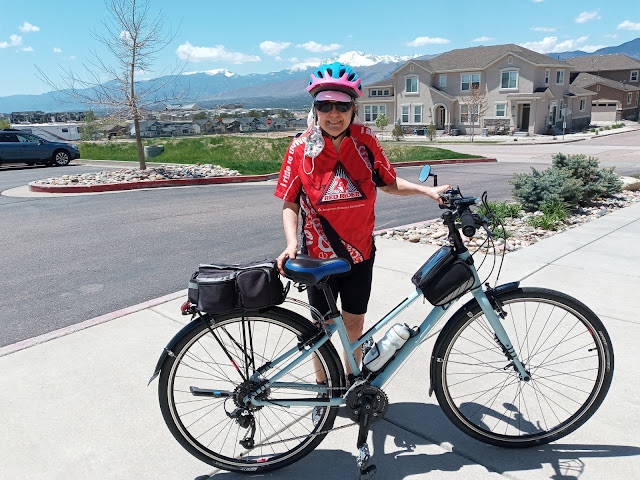 Alas, somethings weren't meant to be, being a Type II diabetic and still on a couple of meds for my heart (heart attack in 2019), There are times when the "meds" for both don't mix well and they give me either "to low blood sugar or blood pressure"! :( Then add the HEAT of summer riding days and I can get "DIZZY spells", in June in the 90+ F weather I've almost dropped my bicycle 3 times when stopped at intersections, so I decided to go back to the "3 wheels" of a recumbent trike for good! Here's my "new to me" Terra trike Rover X8 (used) that I picked up on June 22, 2021. :) 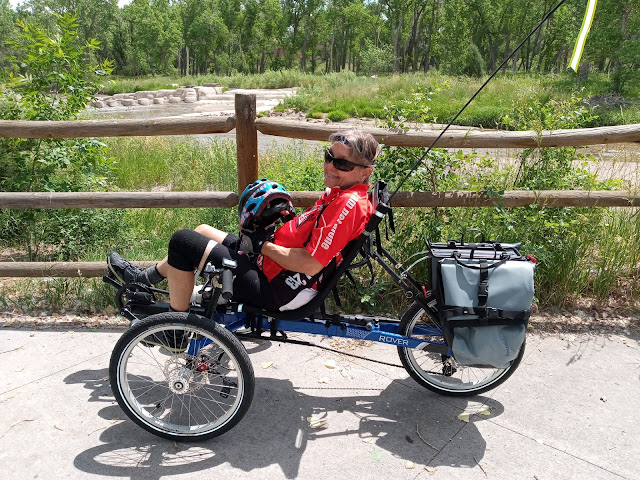 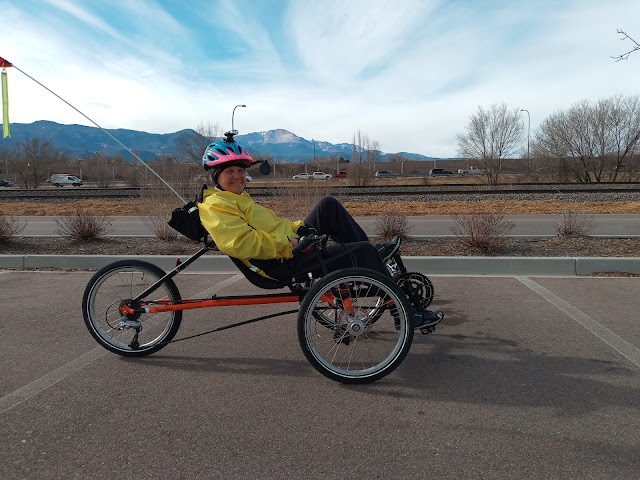