February 2022, A couple of really nice days before the massive Artic Cold Front hit's us on Tue. 2/22 and we are BACK to making ride Video's!!

We've gotten lucky and after the last cold/snow snap we had 3 days of really nice weather so we got in some rides and we are now back to being able to film and upload ride video's again, YEA!!! Last Saturday we took chance and headed up to our local recumbent shop, Angletech www.cycledifferent.com to see if service could sneak us in to have Jo's new 8 speed right side "trigger shifter" installed. We had a appt. for Tues. 22 but there's a massive cold front coming in that day, temps in the -0 range, YIKES! They were able to get the unit installed and we headed out for a ride to let Jo get use to the new shifters!  Multi-trails used and we got in 19 miles. Here's a video, part 1 of our ride up to Angletech.

Then we headed east back down Sinton, then over to T-Gap and ended up on Rock Island Trail over to our favorite turn around point and back to homebase.

On Saturday we started a bit later as I finally sold my SUN EZ-1 SX recumbent bicycle that morning! The day started out gray and cloudy, but the clouds went away, and we had a very nice sunny and actually warm enough to take off a layer and unzip the jackets a bit! :) We headed up north on the Pikes Peak Greenway then via the detour over to the Vincent St. bridge and entry point for the Cottonwood Creek Trail. We rode the trail till the Academy Blvd. exit, then turned around and road back to stop at Panera Bread and get some unsweet iced tea to have with our homemade "trail mix" snack! It was getting into the late afternoon so we just headed south on the PP Greenway over the Popcycle Bridge and did a lap of the Fontanero St. Trailhead again turned around and headed to homebase!! A really nice couple of late February rides, sure wish the weather was going to hold out but sadly WINTER is coming back for several days, RATS!!! 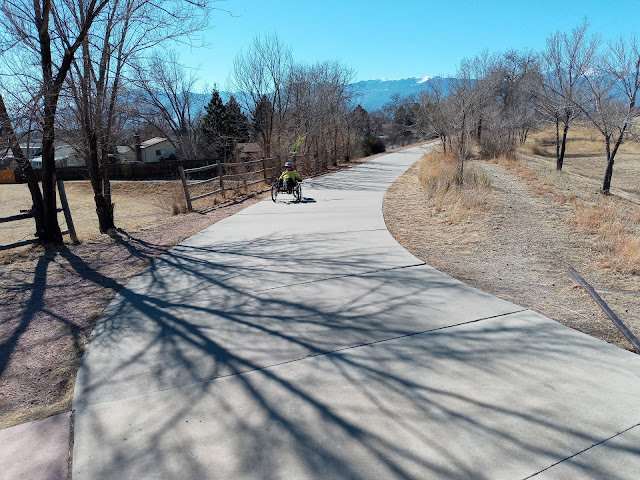 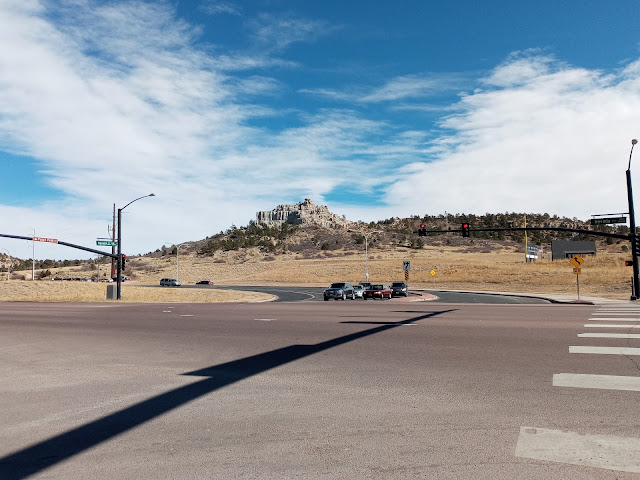 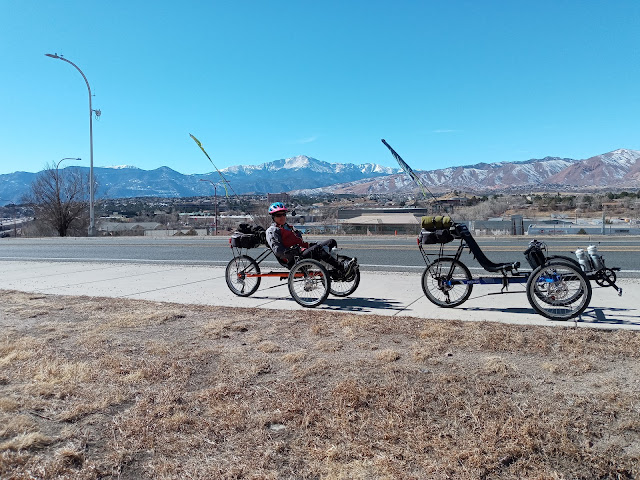 Since I was able to sell my recumbent bike, I'm having a special rear wheel/hub combo built up for my (BJ), TT Rover trike. This wheel will have a 3-speed internal rear hub and the current 12x42 8 speed cassette. This will let me have a "24 speed" instead of just and "8 speed" drive train system. I will have a bit lower gear and a bit higher gear range! :) Can't just add a triple crankset to my TT Rover as it does not have a front derailleur post so I'm really looking forward to getting it installed, hopefully soon and seeing the difference! I will now have 8 speeds in 3 different ranges! FYI. :)
Posted by B.J. and JoLynn Ondo at 2:04 PM 1 comment:
Email ThisBlogThis!Share to TwitterShare to FacebookShare to Pinterest

February 14th., 2022-A Valentine's Day Ride and lunch meet up with my wife JoLynn!

Valentine's Day turned out to be a beautiful day, sunny, got up to 53 F, no clouds and a easter egg blue sky! Jo had a heart doctor's appointment so as her Valentine to ME, she told me to go for a RIDE!! :) I decided to do a loop ride, riding 4 different area rail/urban trails. 18 miles, then we met for lunch downtown and got our favorite burger, ie: the NO BUNS, lettuce wrap western bbq cheeseburger, yum, added some baked pea crisps (Jo is not supposed to have fries) and a unsweet iced tea!! Low carbs and very low sugar!! She walked a 5K from the doctor to the cafe and back home so did a 10K day, we both got in a good workout as my ride route has a lot of uphill inclines!! I did stop at the Sky Bridge Overlook for a photo! 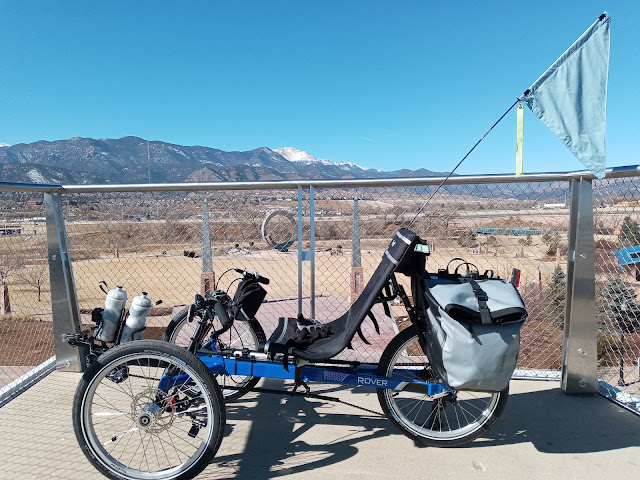 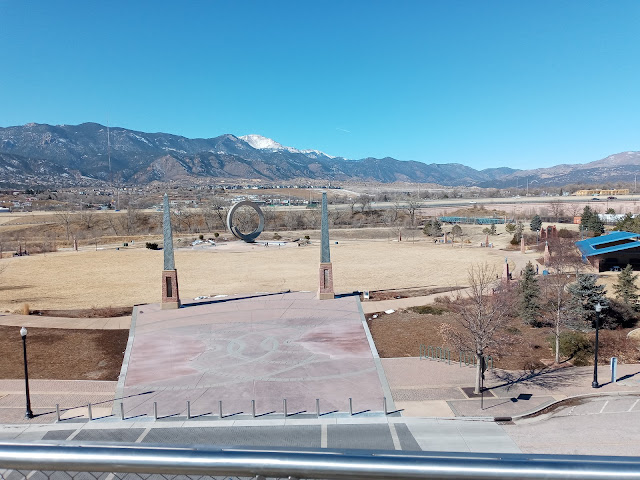 LOL, I had planned to take a long video as we now have higher speed 5G internet, but I guess I put in a uncharged battery in the video cam and all I got of the 18-mile ride was a little under 5 minutes of video, rats! :( Oh well here is the link to the video short:

Posted by B.J. and JoLynn Ondo at 5:52 AM No comments:
Email ThisBlogThis!Share to TwitterShare to FacebookShare to Pinterest

February 8th., 2022- Oh the weather outside has been frightful, but getting to ride again is so delightful!! :)

As the holiday song says: Man, our weather for the last week, sub-zero temps, 7 in. of snow and gray skies! :( Finally, a couple of days ago, the slow warming trend took hold and by the 8th. at least the "roads" were clear of the melting muck we headed out for a ride!  Decided to ride up to the Sacred Grounds Cafe, on the bike lane headed up to the Starsmoor Center in North Cheyenne Canyon. This gave Jo a chance to "test out" the new lower gearing set up as we changed her triple chain wheel from 30/40/52 to 22/32/44 with 152 mm crank arms!

She likes it as it lets her spin much easier! It's a constant uphill grade from 8th. street heading up the canyon, the cafe is a nice place, and we got some hot green tea to go along with our brown bag lunch and enjoyed the sunshine on the front patio! Afterwards we decided not to ride up to the center as it's closed due to bridge repairs heading up the canyon. We flew back down to 8th. street in the bike lane, dodging patches of ICE at times! Down the Tejon St. bike lane over to the Pikes Peak Greenway to downtown Co. Springs, then over to get on Shooks Run Trail heading north. Lucky for us they are getting a lot better about plowing several of the local trail so they were mostly free of melting muck! Sorry for no photos, I was trying to take a video again, using a new homemade camera mounting set up. LOL it's not that easy to find a semi-level mounting point on a recumbent trike for a video cam! Alas, it didn't work as it was to close and you mostly just saw my shoulder so I re-did the mounting point and will give it another try on our weekly FOOD run on Weds. the 9th. Hope your weather has been better and you've been getting in the miles! :)

On Feb. 9th. we did our food run and I added a new video cam mount on the trike, so here is a short video of the "test ride" and food run! As you can see it had quite a bit of shakiness, so I've redesigned the mount and the mounting point and as soon as the weather get's decent again, it's Friday the 12th. and it's been lightly snowing on and off, so we figure Mon. or Tue. next week as it will probably take that long to get rid the "road muck" from the storm, I'll shot another video and hope for a bit less vibrations in the vid!! :)

Posted by B.J. and JoLynn Ondo at 5:51 AM No comments:
Email ThisBlogThis!Share to TwitterShare to FacebookShare to Pinterest

Well we haven't been doing a lot of riding, it's been cold, gray, windy lately. We had a appointment at Angletech for Friday Feb. 5th. to have a 22/32/44 MTB crankset with 152mm arms and a "left side trigger shifter" as due to Jo having a weak left hand, it was just too hard for her to turn the click shifter! Come Monday the weather guesser's said we'd be geting a sub-zero cold front with up to 7 inches of local snow from Tues. night to Thursday morning!! Well our trikes can't plow thru 7 inches of snow, so we called the shop and someone cancelled a service appt. we told them we'd be right up!! See we don't own a CAR so we HAVE to be able to ride to the shop!!!

Got up at the right time, 11 AM and they installed the components, Jo did a quick test ride and really likes the changes, easier shifting and lower overall gearing for climbing up hill grades!! Sadly the wind was blowing a lot harder by the time they finished so we headed straight back to the apartment to tuck the trikes away for a few days! :(  Today, Thursday, it was -3 F when I got up and the high for the day 15 F so even with the sunshine, there will be very little melting, I figure it will probably be Tuesday the 8th. before the roads and trails will be clear enough to ride! :(

Ok, yes we could mount studded tires, put on every layer of clothes we own but we won't! We live in a upstairs apt. we have no garage we could let the trikes "drip dry" and then hose the road crud off of them so we WALK if we have to go outside when it snows, FYI. We have a "recumbent style" exercise bike here at home we use to "put on the miles"! I did 2 30 min. sessions for a total of 17 miles on Weds. so we aren't totally sluffing, LOL! ;) Our last ride was a run up and down the T-Gap Trail back at the end of Jan. 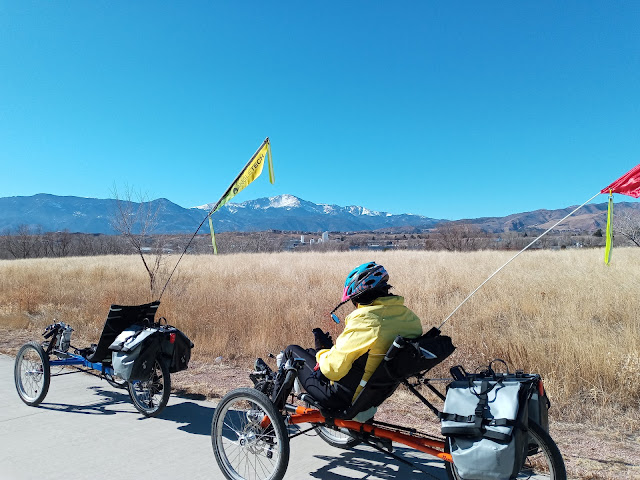 So we will let you know what Jo thinks about the updates to her TT Rambler trike once we can get "On The Road Again", as the song says! From very COLD southern Colorado, Peace Out! ;)
Posted by B.J. and JoLynn Ondo at 7:12 AM 1 comment:
Email ThisBlogThis!Share to TwitterShare to FacebookShare to Pinterest
Newer Posts Older Posts Home
Subscribe to: Posts (Atom)