With Jo being a type II diabetic it's recommend that she has very little pasta in her diet as it has a LOT of carbs! So we don't normally make it for our meals but we both have had a CRAVING for some pasta so we decided to stop at our favorite place, call Panino's in down town Co. Springs. So we took the LONG way and headed out east first on the Templeton Gap Trail. There's on area where the trail goes LOW just a couple of feet above the drainage system heading N & S thru Colorado Springs. 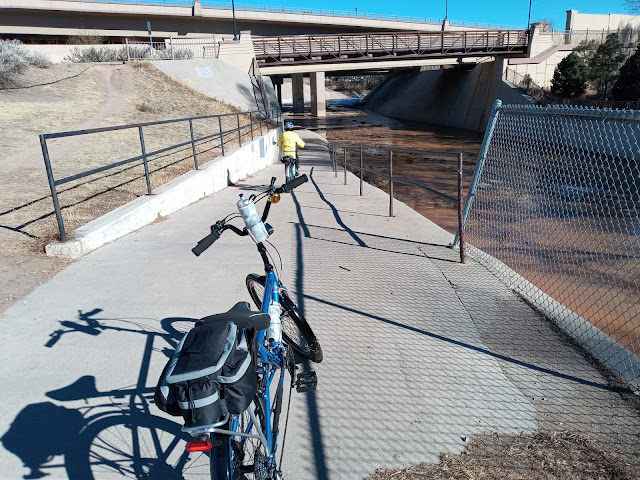 At the north/south drain junction it was a LARGE sheet of ICE so we walked the bikes very slowly, (thank goodness for MTB style bike shoes!), over the ice and restarted the ride heading north. Decided that we didn't want to cross the ice on the way back so we headed up to Academy Blvd. and rode the sidewalk (hardly used by Peds!), over to Meadow Lake bike lane to Austin Bluffs, then took the other leg of the T-Gap trail back, 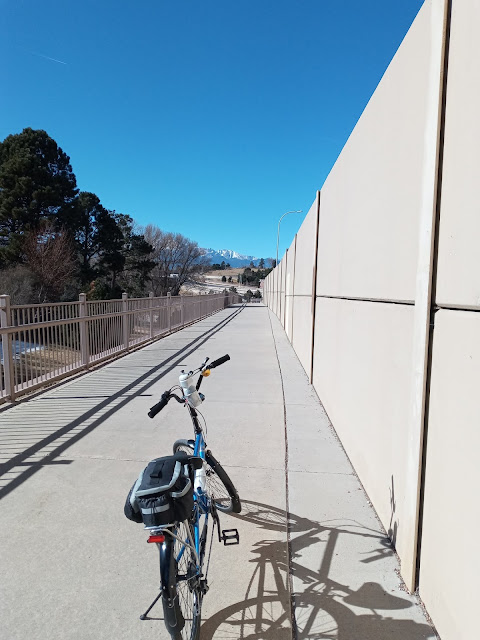 Then down to pick up the side street over to the Templeton Gap Road bike over to Corona St. Bike Blvd. and over to the Willamette Ave. bike lane to the restaurant. BUMMER it was closed due to the Super Bowl, ARRUGH! :( We headed to a different Italian place and it didn't open till 4 PM. Ok, last resort we headed over the Pikes Peak Ave. bike lane to down town and the Red Gravy on Tejon St., YEA they are open! :) We had a Lunch special of salad and fettucine alfredo! It was a bit rich but tasted great!  Now it's been pretty windy for the ride BUT as we headed over the Cimarron St. bridge it was at full gale force!! I could just barely get up to the top in my lowest gear! Poor Jo got blown sideways a foot+ then the direction changed to a headwind and she was stopped dead in her tracks, had to walk the bike to the top to head down and join me!! :O We then headed north on the Walnut St. bike lane over to the Palmer/Mesa Greenway and had to fight the WIND all the way home, man are we worn out!! Still it was 50 F and sunny so it was worth "fighting the wind" and we got in around 20 miles RT for the day! Here is a Relive route tracing video of the ride!