On November 15, we got out and about on the bikes and headed over to Manitou Springs via different urban trails and back streets. It was a nice but chilly morning, I decided to shoot a video but didn't notice that the "supposed" waterproof case for the camera "lightly fogs" in the colder temps so most of the 2 hr. footage had to be scrapped, rats. around 16 miles RT for the ride, here's what's left about 23 minutes of the last part of the ride so it's ok to make FUN of the video, I won't mind! ;)

Well I rode the bike to a different local shop to have a sweet looking set of fenders put on, November 16th. it was only around 4 miles to ride it to the shop to drop it off so I just walked home. They were really busy so they didn't get them on till just before close at 5 pm. so I headed down to the shop in my 27 year old Ford Ranger PU truck and picked up the bike! These fenders really spiff the bike up! It wasn't in real good shape when I bought it as the photo they showed on Craigslist was in a LOT better condition than when I drove 100 miles up to get it! :( So I nicknamed it UD, short for Ugly Duckling but it's turned into a fair Swan with cleaning, adjusting and upgraded accessories added!!  Might have to rename it Phoenix! :) 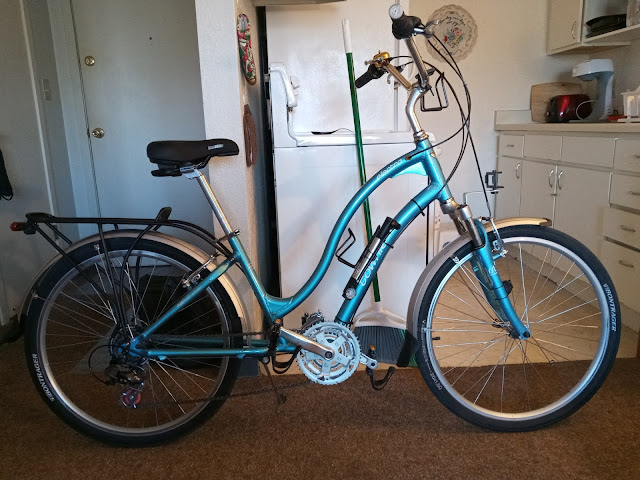 On the 17th. I decided to do some errands and pay a bill or two via bicycle! Then since the day was a nice one, I rode over to the Shooks Run Trail, headed to it's current ending point at Fountain Blvd. then took back streets over to Cascade Ave. heading north and picked up the "Bike Lane" back to the apartment!! 9.95 miles in the 60 F sunshine, nice utility ride! Jo couldn't go as she strained her knee while on a 5 mile walk yesterday, BUMMER!! :( Hopefully she will be ok to ride by Thursday as it's last decent (a bit windy) day with the "rain" coming in for the weekend! :(  Till then, Take care, Ride Safe and have FUN! :)